Marrie Hibbard estimates that in seven out of every 10 of her shifts at St. Mary’s Medical Center, she has to spend some of her time looking for a bed in a psychiatric hospital on the Front Range for a patient.

The psychiatric social worker said finding beds for patients going through a mental health crisis is a constant struggle. It’s especially tough in Mesa County, where West Springs Hospital, the only psychiatric hospital between Denver and Salt Lake City, is often full and has a waiting list that can grow upward of 20 people.

“If they don’t have a bed our job is to find them a bed somewhere else in the state,” Hibbard said. “Really, though, West Springs is our first choice.”

She will soon have a much better chance of securing a local bed for a patient, as West Springs prepares to open a critically needed expanded in-patient facility that will double in capacity.

West Springs Hospital, which is part of the Mind Springs Health network, will start to move patients into its new $34 million facility  Dec. 11 after a multiyear effort, during which the organization raised about half of the money needed through public and private donations and grants.

At 63,000 square feet, the new building at 515 28¾ Road is nearly four times the size of the current hospital and will have 48 beds — 32 for adults and 16 for adolescents. One of the buildings already in use will stay open and licensed, bringing capacity to 64 beds, up from 32 in its current state.

One building will be torn down later in December to make way for the second phase of the project that will bring another 16 beds into the new West Springs Hospital. Mind Springs will need to raise an additional $7 million for the project. That campaign will likely start sometime next year.

“We’re really excited. It’s going to be a really nice facility for people who need it,” said Kim Boe, executive vice president of Mind Springs Health and West Springs Hospital. “We worked hard to make it a warm, welcoming place.” 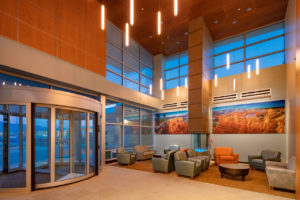 In designing the building, Mind Springs looked at other psychiatric facilities around the country and solicited input from staff and regular patients. The building is filled with natural light and has a few enclosed outdoor areas for patients to spend some time outside at the locked facility.

Boe said the patients surveyed asked for natural light, bigger areas for group work and places to relax outside of their rooms.

New amenities at West Springs include a gym with a half-court basketball area and a solar-powered, state-of-the-art kitchen. There is also a dining area for 40 people. Sodexo will provide the food for the hospital.

The current hospital has no kitchen or dining area and the food is brought in from St. Mary’s, according to Boe.

Each of the areas at the new hospital is locked with a key card needed to open most doors. There are 160 key card readers throughout the hospital.

Staffing areas were designed to keep employees safe and give them the ability to keep an eye on as many places as possible so they can see what is going on and take action if needed. Staff offices are in the center of the hospital, making it easy to get to different places and back. 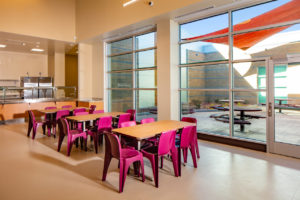 The new hospital has three entrances, including one for law enforcement.

Patient rooms have wicket doors so patients can’t secure themselves in their room. While the doors swing open into the rooms, a cutout can be unlocked and opened by a staff member that swings open into the hallway. The door hinges are solid so someone can’t put their hand in between hinges and injure themselves or someone else by closing the door.

Each patient room also has its own bathroom. At the current hospital, there is, on average, one bathroom for every four rooms. Boe said there was a code change after the original hospital opened.

The furniture is designed to be “anti-ligature,” which means that the hardware cannot be used to attach anything to it that might inflict harm. The hospital has 26 different kinds of glass and the windows can’t be broken. The pictures on the wall in the hallways are built into the walls and can’t be removed.

“It’s a nice place to be a patient and a staff person,” West Springs Medical Director Dr. Frank Lotrich said.

There was no psychiatric hospital in western Colorado before Mind Springs opened West Springs Hospital in 2006. At the time, Mind Springs, then known as Colorado West Regional Mental Health, offered outpatient psychiatric services. Hospitals such as St. Mary’s Medical Center, Montrose Memorial Hospital and Mercy Regional Medical Center in Durango had inpatient psychiatric wards at their facilities. All have gotten out of the business since the opening of West Springs.

While Boe said about 50 percent of the hospital’s patients live in Mesa County, West Springs is geared to serve the entire Western Slope and also takes in patients from places like Moab in eastern Utah.

A waiting list for beds started developing about four years ago, according to Boe, the length of which has ranged from just a few people to more than 20, leaving those in psychiatric crisis in limbo.

Those patients typically have to go home or are sent to places such as St. Mary’s or Community Hospital, where they can at least be monitored and kept safe but don’t really get the care they need.

“It’s a terrible thing to have all these people need you, know you have the expertise to help and not be able to do a thing,” Boe said. “It’s a horrible feeling.”

Mind Springs began discussions on expanding the hospital within months of the waiting list arising and launched an effort to raise half of the money while getting a loan for the rest in hopes of improving and expanding the level of care.

“The buildings we have currently have done a yeoman’s job in the way they are built,” Boe said. “But they were not built where we were anticipating the level of acuity that we are experiencing or the capacity, volume and demand.”

Through its fundraising, the hospital received money from multiple municipalities and counties on the Western Slope whose citizens depend on its services. It received multiple anonymous donations, including $1 million from a resident in the Roaring Fork Valley.

The largest contribution, however, came from SCL Health St. Mary’s, which provided $2.5 million toward the effort. The contribution was made in 2016 to help kickstart the fundraising campaign.

The fundraising website for the hospital indicates it has raised $17.1 million of the $17.75 million goal, but Boe said the effort may be closer to completion than the website states, as discussions are ongoing to secure the rest of the money by the end of the year.

Lotrich said the fundraising effort was successful because so many can relate to the needs of greater mental health services.

“Just about everyone has someone close to them who has a psychiatric illness,” he said. “You don’t have to convince them that it’s common. And everyone knows how little the need is being met.” 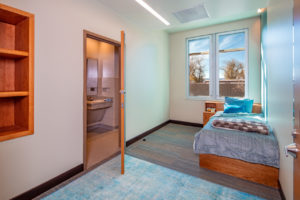 Mental health care is not a 21st century trend, Lotrich said, despite the fact that services were severely lacking in the area prior to the hospital’s original opening. However, awareness has grown, stigmas have been broken and walls have come down when addressing psychiatric care.

“There’s always been a need here,” he said. “It’s something people have lived with and suffered with untreated. It’s a sad fact of life.”

A growing wait list at West Springs that pushes patients to the Front Range in search of beds creates gaps in communication and support, Lotrich said.

Western Colorado residents have their support system near their homes and see psychiatric and primary care doctors in the area. When they are forced to get care on the other side of the state, it’s more difficult to have that support travel with the patient and coordinate care after the stay.

Lotrich said the average stay at West Springs is about seven days, but there is a lot of variability.

The hospital is expected to have a big impact in the community in several other facets.

The Grand Junction Economic Partnership performed an impact study for the new hospital in 2016, which estimated it would create 125 new jobs in the first five years and bring in more than $1.4 million in tax revenue for Mesa County over that same span. The total economic impact is estimated at $35 million for the county.

Boe said the hospital has a staff of 160 and is already beginning to expand.

But maybe more important than the economics is the help the larger hospital can provide for local health care providers and law enforcement officers.

The Mesa County Sheriff’s Office and its deputies regularly deal with mental health issues and have to decide where to take a person enduring a mental health episode. Those places often end up being the jail or one of the area hospitals. More space at West Springs will open up more opportunities.

“It’ll definitely give us more options. More bed space is only a good thing for this community,” sheriff’s spokeswoman Megan Terlecky said, adding that the hospitals “are able to provide services, but it’s even more ideal to take them to a place that is designed to meet their needs.”

St. Mary’s President Brian Davidson said the expanded hospital would be of great help to his hospital in finding a room for patients who are waiting for a bed. The hospital is also typically not reimbursed by insurance for the patient’s stay. Those factors made the contribution toward the new hospital an easy decision for his hospital and SCL Health.

“We house them with no acute medical problem, which often requires extra staff or security that we are funding to do that,” he said. “We quickly realized we could make that type of investment and see a sizable expense reduction and also benefit the community.”