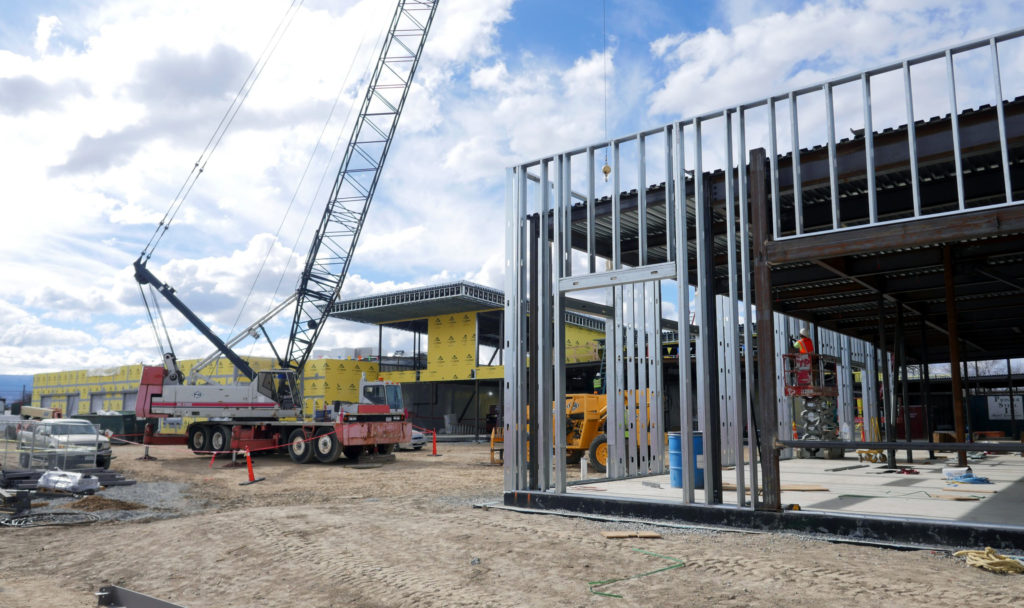 A much-needed psychiatric hospital expansion in Grand Junction — which will serve as a primary care facility for the Roaring Fork Valley — has made significant progress toward its fundraising goals, due in part to the efforts of Pitkin County Commissioner Greg Poschman.

The West Springs Hospital is being built by Mind Springs Health, the Western Slope’s largest provider of counseling and therapy for mental wellness.

The organization announced this week that it has secured a $2 million challenge grant that it will collect if it can raise an additional $2 million through a fundraising campaign now underway.

According to Roger Sheffield, Mind Springs’ vice president of development, West Springs Hospital’s expansion has been a long time coming. It should open later this year if the fundraising campaign is successful.

“We have been working on this for more than four years,” Sheffield said. “This is the only psychiatric hospital between Denver and Salt Lake City. This hospital serves the entire Western Slope of Colorado. It has a total of only 32 beds. It is often over-subscribed by as many as 20 people. What that means is that a lot of people who really need this facility are instead not receiving treatment or they are incarcerated in facilities that do not have the training or capability of meeting their needs.”

According to Sheffield, the new facility, which would offer 64 beds, is a lock-down psychiatric hospital that will house patients in imminent danger to themselves or others, or who are gravely disabled.

“This is for people who are not able to take care of themselves,” he said.

The current 32-bed hospital tends to about 1,200 patients a year. Sheffield said the average length of stay is seven days, after which patients are released into a plethora of follow-up support services.

The new facility will cost $34 million.

Half of that is coming from a loan issued to Mind Springs from the Bank of the San Juans, which will be repaid through normal operational channels.

An additional $13.75 million was raised through a multi-year philanthropic fundraising effort. That left a $4 million shortfall, which Mind Springs has made a significant dent in by securing a $2 million challenge grant.

According to Sheffield, a half-dozen donors came together to offer $2 million, if Mind Springs can raise the final $2 million. Funding for the challenge grant, announced this week in a press release, consists of a $1 million gift from an anonymous Roaring Fork Valley family, an additional $500,000 grant from the Basalt-based Alpenglow Foundation, while the $500,000 was raised from donors in the Roaring Fork and Vail valleys.

J. Robert Young, Rod & Beth Slifer and Brian Davidson, MD, co-chairs of the fundraising effort, dubbed “Building Sanctuary | Rebuilding Lives,” announced the gifts saying, “With this $2 million challenge, new donors will both double their gifts and carry us across the finish line of this critical campaign. A successful match will generate the final $4 million we need to complete construction and bring the new facility on-line this year.”

The campaign co-chairs extended special thanks to Poschman, saying through a press release that “Greg’s tireless leadership was instrumental in developing the challenge grant. Through local service providers, Poschman became aware of a critical shortage of psychiatric beds and that, every day, children, adolescents and adults of all ages are forced to wait needlessly in emergency rooms, and sometimes even in jail, before a bed becomes available to them.”

“We are all aware of the high suicide rate in this area and the opioid, meth and alcohol issues,” Poschman said. “I went and toured the place in Grand Junction. I decided to help. I got some facts and figures and talked to [Pitkin County Sheriff] Joe DiSalvo. I then posted something on Facebook.”

“Greg’s post resonated with us,” Alpenglow’s John & Laurel Catto said. “We joined him at West Springs to see the hospital’s expansion plan first-hand. The fact that the Western Slope has less than 20 percent of the national average for psychiatric beds shocked us. We are convinced that our community will benefit immeasurably from increased inpatient capacity at West Springs.”

Poschman added that, “With exactly zero inpatient psychiatric beds in our valley, local hospitals and law enforcement bear the brunt of these emergencies without the resources to handle them. We have to address this and bring more local resources to combat our exceptionally high suicide rates.”

The expanded facility gets a big thumbs up from DiSalvo.

“I think anything outside the jail environment that deals with the mental-health issue represents progress,” DiSalvo said. “I am excited about this. Our biggest challenge as a law-enforcement agency is dealing with severely mentally ill people. It is inhumane for these people to be in a jail, where they can become victims. Locking them down for their own protection is also inhumane.

“We do our best to make sure those with mental illnesses who are in our jail are properly managed, but it’s very challenging,” DiSalvo continued. “Our jail deputies have to be mental-health counselors, social workers and guards.”

Sheffield said that the majority of patients at the current West Springs facility come from Mesa County, but that the second-highest number come from the Roaring Fork Valley.

For more information on Building Sanctuary | Rebuilding Lives, the campaign for Mind Springs Health and West Springs Hospital, and to see plans for the new hospital, visit www.BuildingSanctuary.org.